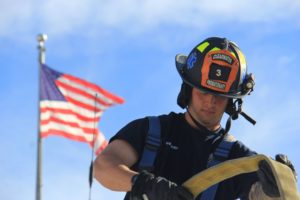 CLEARWATER —After a string of sexual misconduct cases, low morale and tension among the ranks last year, Clearwater Fire & Rescue called in the professionals.

Organizational psychologists, Drs. Michael Zia Mian and Leslie A. Miller, toured fire stations in August and rode along on calls, watching the way employees interacted. They interviewed department leaders and firefighters in person and distributed an anonymous online survey.

What they learned: Only about a third of Clearwater Fire & Rescue employees had a positive impression of the department. Instead, employees felt besieged by negative workplace behaviors and said an “us-versus-them” mentality had driven a wedge between leadership and staff, according to Mian and Miller’s final report issued in November.

The most common concerns were about rumors and gossip, a feeling that city administration is indifferent to the needs of the fire department and a lack of clarity about the direction for the future.

In the six months since Chief Scott Ehlers took over the department, Clearwater Fire & Rescue has been working to address the problems outlined in the psychologists’ report, which cost the city $34,493. The ongoing process will include a mid-year update in the summer and another full-fledged survey at the end of the year.

“The department is not broken. The department is very well-funded, the staff is well trained and the equipment is phenomenal,” Ehlers said. “What we’re lacking is a trust and respect component between labor and management.”

The department has already acted on some of the psychologists’ dozen recommendations. Other suggestions will take longer to carry out.

One of the biggest complaints was that the number of standard operating procedures actually complicated basic fire work. Ehlers said those are being revised, and some have been consolidated.

To help staff move up the ranks, the department is also creating a leadership development program. And chiefs are now required to visit stations on a regular basis, addressing a major complaint that senior leadership was not engaged.

But the recommendation that union, Fire & Rescue leadership and city administration meet regularly has not been put into practice yet, Ehlers said.

Miller said organizational psychologists are most commonly used to solve communication issues within businesses and other corporations. They are rarely used in fire service, she said.

“With a medical doctor, they deal with health problems of people and in organizational psychology, we deal with workplace problems and diagnose the causes of those problems,” Miller said.

Mian said he believes Clearwater Fire & Rescue is high performing and the firefighters are well trained and committed to their work. But a lack of communication and trust pulled down the department’s morale, and a feeling that discipline was being applied unfairly exasperated highly publicized sexual misconduct cases over the years, he said.

“People don’t feel as empowered as maybe they should be,” Mian said. “These folks do life-saving work. But there’s some sense that isn’t valued or recognized enough.”

Mian and Miller said institutional breakdowns in an organization cannot be solved overnight. But they did identify a bright spot: while only 10 percent of people who took the survey said the direction for the future was clear, 63 percent reported being optimistic about the future.

Sean Becker, president of Clearwater Fire Fighters Association, the local union, said in a statement the improvements are a work in progress. While he is encouraged by the efforts, more communication is still needed.

“We are trying to remain optimistic as we move forward with our new administration, but it’s still very early in the process to say that we have fixed all of our problems,” he wrote. “The ideas are coming in quick, but we just have to figure out how to properly implement all of them while keeping morale and cost factors in mind.”